Tom Davis' Top Tips For Fuelling During A Half Ironman

Giant ambassador Tom Davis is a professional triathlete who has already racked up some impressive podium finishes for long-distance triathlon. As racing is edging closer to returning, we spoke to him about his advice regarding fuelling for a long-distance triathlon, focusing specifically on the 70.3 (half ironman) duration. Although nutrition is very personal, we hope you find some good ideas you can take into your next 70.3 race!

With racing back on the horizon, I thought I could show how I fuel for longer distance racing, hoping that it could help others on race day.

So, here's my very own take on a 70.3 distance fuelling strategy. This won't work for everyone, but I hope the information provided can give greater insight and perhaps some ideas to take into your next race.

Race day nutrition starts with a 'taper week diet', specifically focussing on nutrition the days leading into the race - but that's another topic. Here I'll focus on what race fuel looks like.

It's essential to train the plan and make sure that your stomach can handle the fuel you intend to use. By using the same on long rides and race-specific sets, you'll be safe in the knowledge your nutrition won't cause an issue, and there'll be no upset stomachs on race day.

Around half an hour before the swim, I'll take some Enervit Liquid Gel with 20 mg caffeine and 30g carbs. From then until the start, I tend to sip on an electrolyte solution, provided I've managed to have a decent breakfast, that is.

I don't think it's necessary to consume energy drinks here - I feel it upsets my stomach on the swim.

After the swim is done and I'm onto the bike, this is when the real fueling can start. I usually have a plan of around 100g of carbs an hour, but that's something I've tried over some time, and I have trained the body to absorb the higher levels of carbs through plenty of training and practice. 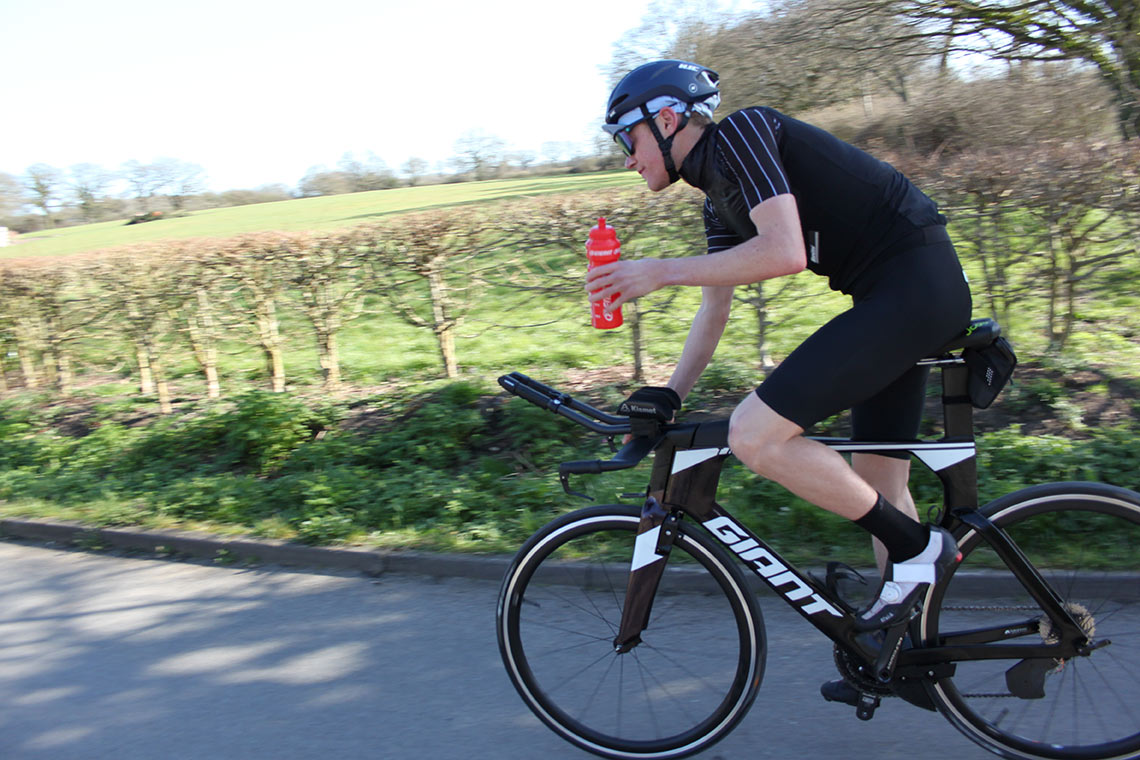 Towards the end of the ride, I'll take a final liquid gel, so another 20mg of caffeine and 30g of carbs. All the gels live in the integrated bento box on the Trinity, making for easy access while still on the TT bars.

As I come onto the run, fueling becomes a bit trickier and a bit more to feel.

I've had days where I come off feeling amazing and other days when I need to change the plan. I always set out with the idea of using a liquid gel every 4k (around 15 mins) - so a total of 4 gels (120g carbs, 80mg caffeine).

However, if I start flagging or my initial strategy isn't going to plan, I'll use on-course nutrition. I tend to stick to old fashioned Coca Cola, staying away from unknown brands that I've not tried before.

As I mentioned earlier, it's important to remember to trial any nutrition in training; and identify the products that work for you. I've found that Enervit is the best for me and my stomach, so I stick to what I know.

Be sure to remember what everyone always says and never try anything new on race day, and I hope this information helps you get around your next 70.3!